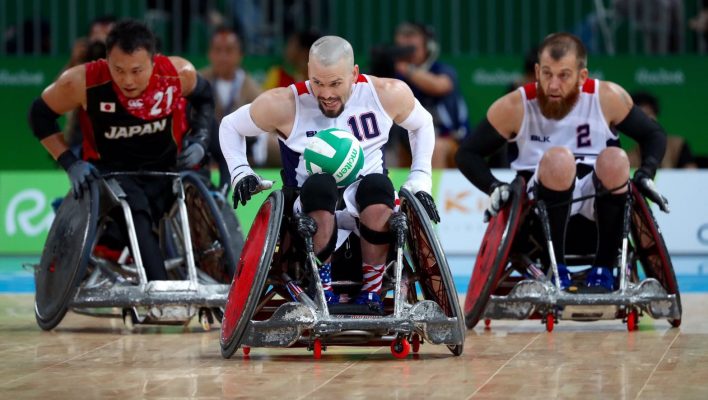 Day Three from Rio – The United States vs. Japan

Rio De Janerio, BRAZIL – The United States, current number one in the world faced Japan, the current number three in IWRF rankings for a showdown at Carioca 1 Friday.  The last game of pool play for both countries at the 2016 Paralympic Games ended with the U.S. remaining undefeated thus far here in Rio with a 57-56 overtime victory.

Japan opened with the first score of the game which stayed fairly evenly matched for the period.  With just one turnover from each team at the end of the first it was Japan 15, the U.S. 14.

A quick score from Chuck Aoki (Minneapolis, MN) kicked off the second period as the evenly scoring lines continued from both squads. A missed pass for Japan with 2.30 left on the clock in the second allowed the U.S. to put up their first two point lead of the game going ahead 25-23.  Japan came back to score just as time expired in the first half bringing the score to the U.S. 27, Japan 26.

The third period of play seemed to mirror that of the first half with strong defense and quick breakaways offered up from both Japan and the U.S. By the end of three it was all tied up again at 39 a piece.

The U.S . lineup of Aoki, Josh Wheeler (San Tan Valley, AZ) , Chuck Melton (Richview, IL) and Jeff Butler (Ft. Wayne, IN)  took the court again for the opening seconds of the fourth, a quick substitution for Melton to Seth McBride (Portland, OR) gave the veteran rugby player his first playing time of the game and the scoring continued to volley across both ends of the floor.  It was 51-51 at the end regulation, both teams had just four turnovers in regulation play.

Overtime seemed like it would be just more of the hard hitting back and forth play but with just 4.8 seconds left in the game a long court pass from Josh Wheeler connected with Aoki for the  57-56 win.  Aoki, who played every minute of the game was the leading scorer for the U.S. with 26.

“The passion that this team played with is just amazing to see, ” said Coach Gumbert.  “Nobody gave up, nobody gave up on each other.  We played as one, this kind of win gives us a lot of confidence going into the semi finals.”

The U.S. will now go on to Saturday’s semi final against either Canada or Australia as determined by the late session game on Saturday. Team USA is now 26-2 in Paralympic Competition having been on the podium in every Games since the introduction of the sport at Sydney 2000 with two golds (Sydney 2000 and Beijing 2008) and two bronze (Athens 2004 and London 2012).   The United States regained their title as the number one team in the world at the recent 2016 Canada Cup.