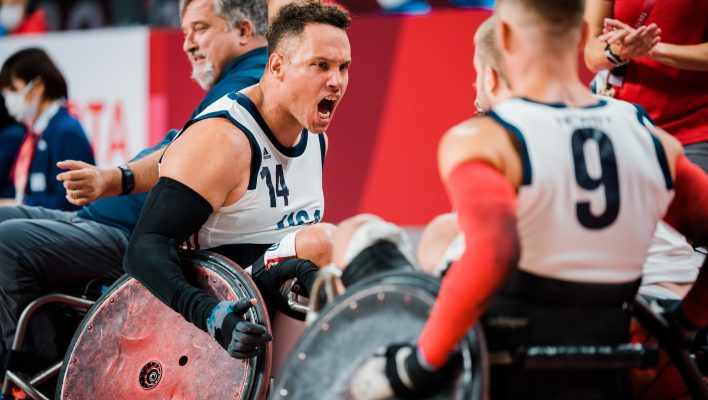 TOKYO   USAWR notched their second win at the Paralympic Games Tokyo 2020 with a 58-54 win over Canada. Top scorers for the U.S. were Chuck Aoki (Minneapolis, MN) with 30 and Josh Wheeler (Tucson, AZ) with 14.

Yesterday’s U.S. win over New Zealand showed the American offensive strategy was strong. Today, a mix of strategic defensive and an astounding 30 goals from Aoki proved to be a winning combination in this very physical match-up.  As the game opened, a battle ensued from the start with the lead trading back and forth throughout the first two periods. The teams went into halftime with Canada up 28-27.  The U.S. came out of half time with renewed energy and focus capitalizing on Canadian turnovers and penalties to tie and then break away to take their first lead of the game. The physical match up continued and the U.S. extended their lead by 3 at the end of the 3rd period, capped by a pass from Joe Delagrave (Holmen, WI) to Aoki who scored with less than one second on the clock.  As the final minutes of the game ticked down in the fourth, the U.S. picked up another try to extend the margin to four, finishing out the match with the 58-54 win.

Today’s win secures the U.S. a berth in the semi-finals. “Securing a spot in the semis today is a big W for the team, “ said Coach Gumbert. “Anytime we get to play Canada it is huge. Today’s game showed we could ride the valleys and the peaks of the game. It showed off our culture to never quit.” For American Chad Cohn (Tucson, AZ) today was a big part of why he loves rugby.  “This was a great defensive day and that is what I focus on in my game and take great pride in. We came together really well today.”

Next up for the Americans is their last round of pool play facing Great Britain on Friday, August 27th in Tokyo.