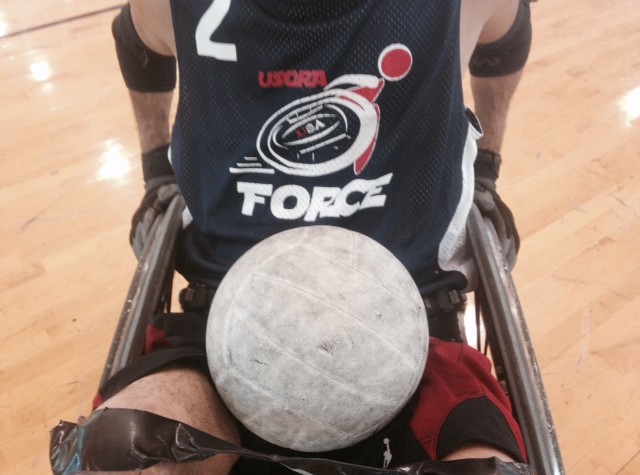 BIRMINGHAM, AL – Team Force was together on the court this weekend for the first time since our competition in Switzerland. Though the Force didn’t come out as number one in the Switzerland Preparation Tournament we gave many of the teams all they could handle losing to Germany by only two goals. The team held a three day training camp at the Lakeshore Foundation in Birmingham with 13 team members in attendance.  Head Coach Ceruti states; “ I was pleased with the way every player showed up in shape and ready to play.  We worked on some new lines, and had some players in new roles.  Adding that to the work we’ve already done just expands the depth and diversity to our roster going forward.  It was a great start to our second year together.”   All of the members of Force are just in the beginning stages of starting the USQRA season with their club teams so we spent time tuning up equipment, getting the feel back for our chairs, and getting back into the groove of playing.  On Saturday afternoon we scrimmaged the Lakeshore Demolition for two games.  Both teams had the opportunity to work with many different players and work on many different scenarios.  The Force came out on top in both games and everyone got a lot of playing time and experience on the court. Training camp was concluded on Sunday morning with a training session and team meeting.

Team member Brandon Somerville states, “Camp was great this past weekend. It was great to see my fellow Force teammates as this was the first time since Switzerland.  It was great to see how much everyone has improved as individuals.  Not only has everyone worked hard since then we worked even harder as a team this camp.  Without the help of our coaches and staff and the level of intensity brought by the players we couldn’t have made the strides we did throughout camp.  I look forward to our upcoming season together as we continue to grow as a team and get better.”

The team will be together again for a training camp in May at the Lakeshore Foundation. In the meantime the players will be in season and competition with their club teams.  The following teams are represented on team Force: