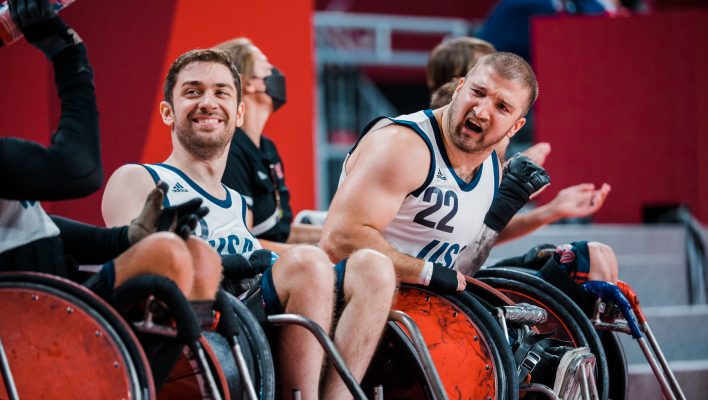 TOKYO   The United States will advance to the gold medal final of the Paralympic Games Tokyo 2020 after today’s 49-42 semi final win over reigning Paralympic champion, Australia. Top scorers for the U.S. were Chuck Aoki (Minneapolis, MN) with 27 and Josh Wheeler (Tucson, AZ) with 9.

The U.S. last faced Australia in Paralympic competition in Rio where the Americans lost in a heartbreaking 58-59 double overtime thriller widely regarded as the best wheelchair rugby match ever played.  Today’s match up would be quite different as the U.S. took the early lead and never looked back. Turnovers were much of the story of the day, the U.S. had just three compared to 10 for the Australians.

Throughout the four periods the U.S. capitalized on opportunities and slowly widened the margin, up by a seven try spread by mid- point in the third. By the fourth period Coach Gumbert was able to get playing time for the entire team and watched play after play get executed just as they had practiced in the lead up to the Games. “Today I watched the team really execute and do the things we have worked on endlessly, “ said Gumbert. “Yesterday we did not seem to be on the same page for parts of the game but today, we were and it made a huge difference, really proud of this team.”

Thinking ahead to tomorrow’s gold medal final, Co- Captain Joe Delagrave (Holmen, WI) shared “ I’m just so proud of everyone in our program.  The guys here, (our alternates) the lady and guys at home. Our staff. The players that have come and gone the last 13 years. We want to go win but a gold medal won’t change what my purpose is. As Irv (John Candy) in Cool Runnings says ‘ a gold medal is a wonderful thing but if you are not enough without one, you’ll never be enough with one’.”

Also advancing to tomorrow’s semi final is Great Britain who defeated Japan 55-49 in the earlier semi final putting them in their first ever gold medal match at a Paralympic Games. The U.S. faced Great Britain earlier in these Games in pool play Friday winning by a narrow 50-48 margin.
The Gold medal final at Yoyogi National Stadium will take place at 6 p.m. JST Sunday, August 29th.