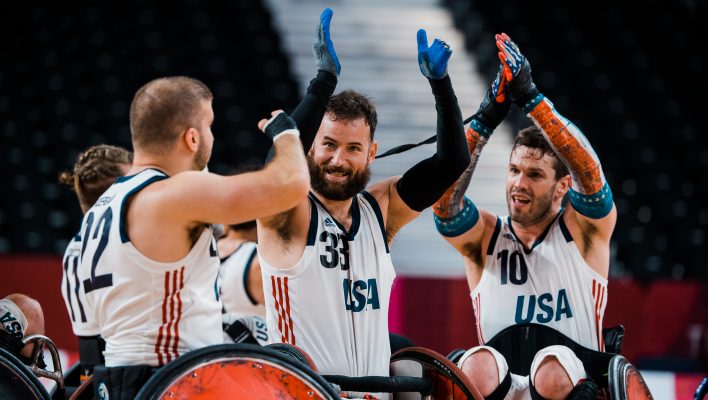 TOKYO   The United States finished out pool play today at the Paralympic Games Tokyo 2020 undefeated after their win over Great Britain, 50-48. Top scorers for the U.S. were Chuck Aoki (Minneapolis, MN) with 20 and Josh Wheeler (Tucson, AZ)  with 14 .

Taking the first try of the game, Great Britain stormed the court and with multiple steals and turnovers secured a five try lead that found the Americans down 8-13 at the end of the first. While there were glimmers in the second period that the tables would turn, the U.S. could not capitalize on opportunities and while they managed to close the gap, they still found themselves down by two, 23-25 at half-time.

Best described as a chess match, the third saw the Americans finally come within one, the end of the period though would still find them down 34-35. With one period of play left the U.S. maintained their aggressive defensive stand and smart offensive strategy, finally tying, then taking the lead. As the game remained back and forth, a missed pass by Great Britain with little time left on the clock let the Americans in to score and notch a two try margin with the final score, 50-48.

Evident in today’s win was the strong U.S. focus on teamwork and the important role it plays especially in the toughest of match-ups. Co-Captains Joe Delagrave (Holmen, WI) and Chuck Melton (Richview, IL) shared about the respect these two team leaders and the team as a whole have for one another. “When we are in a game situation, camps, off the court, I am very vocal, “ said Delagrave. “Chuck (Melton) is quiet but when he says something, we listen.  He reminded us the other day ‘hungry, heart and hustle’. I love that guy so much, we play together a lot and I’ve learned so much from him as a man and as a leader. ” Melton shared the same regard for his co-captain and friend. “Same goes for Joe,” said Melton. “ I am more of a quiet leader I’ve learned so much from Joe he is very vocal and outspoken. Everything he does he does with heart and I can’t thank him enough for the man and the leader I am on this team, I love him too.”

Coach Gumbert echoed the importance of teamwork and camaraderie in a game like today’s. “Having been in this exact situation before with Great Britain in 2012, we clawed back then and learned from it and you have to know, you aren’t going to get them all back in one play,” said Gumbert. “One at a time, all the things we’ve talked about as a team – trust, love believe in each other, follow the game plan, you saw that today.  There would have been no way for us to get back in this game without it.”

Today’s win advanced the U.S. as the number one seed in Pool B, they will play reigning Paralympic Champion Australia in tomorrow’s semi-final at 4:30 a.m. EST. Great Britain is also through to the semis and will face Pool A leader Japan in the other semi-final match of the day.