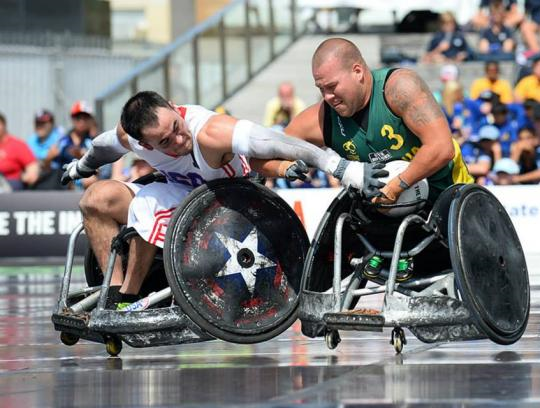 Teams to train and compete in October

Excitement is building for a wheelchair rugby series featuring two of the top teams in the world that will face off in Birmingham, Alabama beginning on October 7, 2014. The U.S. Wheelchair Rugby team and the Australian Steelers will converge on Lakeshore Foundation, U.S. Olympic & Paralympic Training Site, for a training camp and competition series.

“We are excited to be able to host the Australian Steelers,” said U.S. Head Coach James Gumbert. “This event presents USAWR (USA Wheelchair Rugby) with the opportunity to have a much needed competition and showcase our sport on home soil.  Last year Australia hosted the Tri nation Series and we were able to attend and learned a great deal from it.  Right now we are coming off a disappointing bronze medal at the World Championships in early August, and competitions like this help to further refine our plan heading towards Rio 2016.”

This event stretches over nine days and includes training, team video sessions and five games between the Australians and Americans. Australia Head Coach Brad Dubberly said, “Following our successful World a Championships campaign, the attention for our Australian Wheelchair Rugby Team immediately shifts to the 2016 Rio Paralympic Games. What better way to kick-off this campaign by having the two most successful nations in the sport having a series together. Although our team will not be at complete full strength, we will still have a strong team out to impress. This series provides us a great opportunity to test some up and coming athletes who are keen to impress and put down some strong performances to stake their claims and position apart of our program as we head towards 2016.”

Team arrivals for the event begin on Thursday, October 2nd followed by four days of training. Then on Tuesday, October 7th, the first game between the teams will be held. A complete game schedule is below.